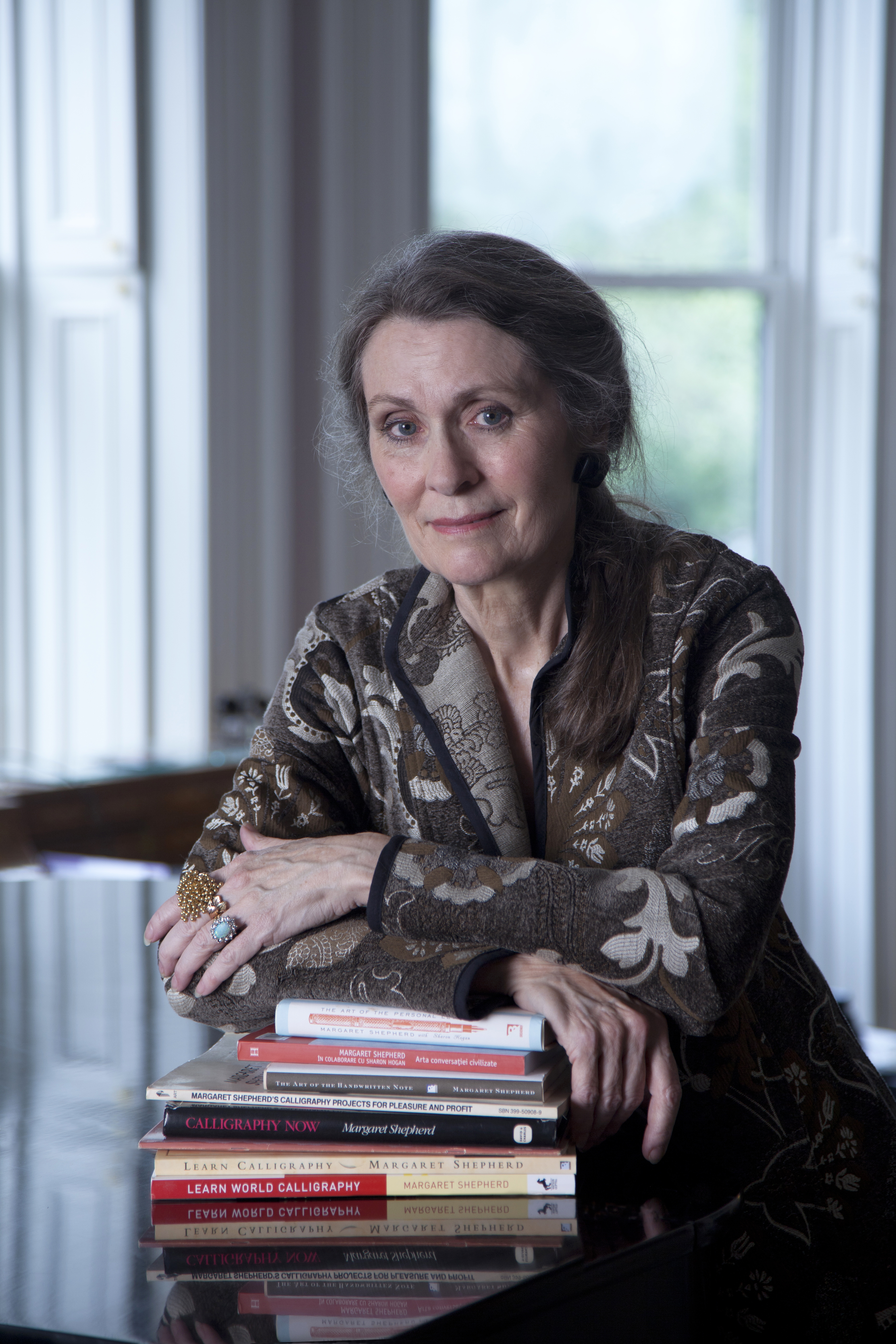 Margaret Shepherd is a well-known calligrapher and author, whose many books have helped make calligraphy accessible to a large public worldwide. She has researched, taught, written, freelanced, and exhibited extensively. She lives in Boston, where she created the Boston Calligraphy Trail.

Ms. Shepherd's 45-year career has ranged from lettering thousands of MIT diplomas to restoring the ceiling inscriptions in classical Greek at Boston College. She has written scrolls of retirement for many law firms, as well as created honorary degrees for Lesley College.

Her design work includes creating a signature logo for Chef Jacques Pepin. Ms. Shepherd's expertise was called upon in the creation and design of a calligraphy preservation spray.

Through reviews and interviews, Ms. Shepherd has discussed many aspects of calligraphy and correspondence for the BBC, CBS Sunday Morning, National Public Radio, Newsweek, The Economist, Kiplinger Personal Finance, and the New York Times.

As an educator, Ms. Shepherd has given lectures, workshops, and completed artist-in-residence programs at Boston University, Harvard Librarians' Association, Mankato State College, Stanford University, and many other venues in the USA and abroad. She has taught calligraphy at the Rhode Island School of Design, to art teachers in the Framingham school system, as well as to high school students at the Boston Arts Academy.

Margaret Shepherd's calligraphy is in the Cooper-Hewitt Museum (Smithsonian) collection in New York City, where it was featured in the 1982 show "Writing and Reading". Her work is also in the Rare Books and Manuscripts Department of the Boston Public Library. Her 60-piece permanent memorial installation at the First Church in Boston was introduced in 1980 with her lecture and exhibition at the Boston Athenaeum, "Letters, Spaces, and People."

Ms. Shepherd has mounted solo shows in the Wellesley College Rare Books Library, Lesley College, the St. Botolph Club, and the Hartford Public Library, where one of her Wallace Stevens poems hangs in the room dedicated to the poet. She participated in a juried calligraphy group show, "Calligraphy and the Graphic Arts" at the Master Eagle Gallery in New York City. Her invitational shows include: "Tradition and Transformation" at the Federal Reserve Gallery, "Passages" at the St. Botolph Club, and the 1998 Boston Athenaeum members show.